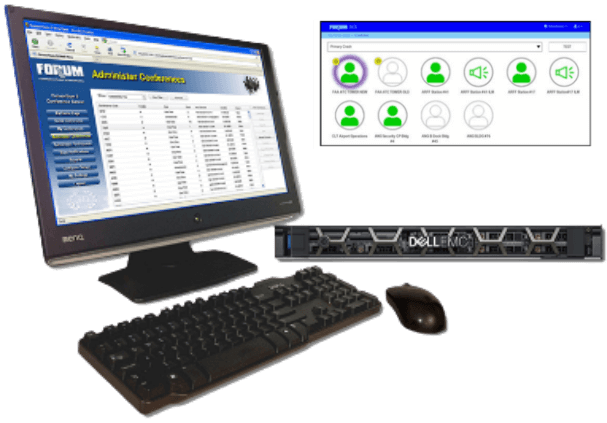 The ConsortAlert is Forum Communications’ IP based Emergency Notification System initially designed for the aviation industry, particularly for Commercial Airports and Military Airfields. It is based on our flagship
Consortium III audio conferencing product coupled with our Alert III intelligent peripheral products. For other industry applications see Non-Aviation Applications.

ConsortAlert is Forum Communications’ Emergency Notification System that provides instant alerts to predefined individuals or teams of an important incident or triggers physical actions related to the incident. The ConsortAlert system can receive a number of different inputs that can initiate the incident alert. The ConsortAlert also has a number of different output options to alert those in the need to know of an emergency situation.

Due to this flexibility, ConsortAlert can be used in a variety of applications. It is used in Airports to immediately alert the fire and rescue personnel of an aircraft emergency and help them respond as quickly as possible. It can be used at different facilities, such as a manufacturing or warehouse facility to send an instant emergency alert to specific team members of a safety, security, or hazardous incident happening at the facility. It can be used in large office buildings to instantly notify the security team of security breach. Data centers is another good application for ConsortAlert. Data center outages can be caused by network failures, hardware or software malfunction, power outages, cyber-attacks or human error. According to Gartner, data center downtime costs $5,600 per minute on average so responding immediately to these incidents is critical.

The diagram below shows the various inputs (phone, soft button, or Incident Detection System) that can be handled by the ConsortAlert System and the various alert methods (audio, visual, or mechanical) that can be triggered once activated by the manual or automatic initiator.

With this system, direct connections between the initiating crash phone at the ATC tower and dedicated VoIP crash phones at the ARFF Fire Station, Airport Operations Center and other designated facilities are possible, without the need of an intermediate SIP call server. The ConsortAlert server has integrated SIP telephone engine functionality to allow direct connections to the VoIP crash phones which can register directly with the ConsortAlert server. This allows the airport to stay FAA compliant and meet the requirements of FAA Advisory Circular - # 150/5210-7D, by eliminating an intermediate call server and another point for network failure or call delay. This Advisory Circular provides guidance related to “Aircraft Rescue and Fire Fighting Communications”.

Per emergency alert systems, the ConsortAlert system, once the initiator goes off-hook, will instantly ring all crash phones simultaneously, establishing a secure and immediate teleconference. The system is independent from other systems or networks, is extremely reliable, and easy to configure and maintain. For maximum network security and reliability, the ConsortAlert crash network needs to be on its own private network or have its own subnet or dedicated VLAN on the airport IP network. This ConsortAlert configuration is not impacted by the larger Airport IP network as it is simply using the fiber or copper infrastructure and is contained in its’ own secure and predefined isolated network. By configuring the network like this, the ConsortAlert system will remain isolated and immune to the many vulnerabilities that other IP networks are exposed to and must continually resolve.

The ConsortAlert coupled with the ILM can create Emergency Notifications to designated participants and activate various physical actions that are very useful in an emergency situation. Specific conferences can be created for different teams (Medical, Fire, Security, Hazardous Waste, etc. ...) that would get notified depending on the particular incident that occurs. In addition, the ILM can trigger physical actions such as activating strobes or sirens, displaying messages on digital signage, sending audio announcements (or real-time audio) over speakers or PA systems and turning off power to certain areas, if desired. These actions can also be differentiated to quickly identify the type of emergency such as red strobe lights for fire alerts, blue strobe lights for medical alerts and orange strobe lights for security alerts. The Emergency Notification system can also use customizable tones, ring tones or variable ring
cadences to identify the different emergency types. In addition to the Aviation industry, the ConsortAlert Emergency Notification System can be used for Manufacturing Facility Incident Alerts, Warehouse Incident Alerts, Seaport Incident Alerts and Data Center Incident Alerts.

Thank you.
Your submission has been received.
Oops! Something went wrong while submitting the form.